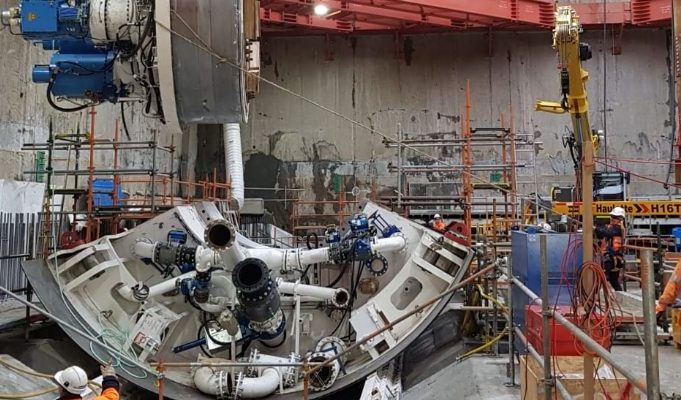 The first piece of a massive tunnel boring machine (TBM) has been assembled in North Melbourne in preparation for drilling works on the Metro Tunnel project.

The delivery of the machines component coincides with the one-year anniversary of ground being broken at the site. Three pieces of the TBM have been lowered into the station box in the last week, with crews working to finish the machine as soon as possible.

The TBM, nicknamed ‘Joan’ after Victoria’s first Premier Joan Kirner, will excavate over 100,000 cubic metres of rock and soil once launched. The boring project is part of the winter “suburban transport blitz” announced by the Victorian Government last month.

The construction marks the first TBMs planned for development on the Metro Tunnel project.

“Crews are working around the clock to put these massive machines together, which will dig the Metro Tunnel,  untangle the city loop, and deliver more trains more often across Melbourne,” Premier Andrews said.

“It’s part of our massive Suburban Transport Blitz – which is creating thousands of jobs and building the road and rail projects we need to get you where you need to go.”

Buses will replace trains on the Pakenham, Cranbourne and Frankston lines between Flinders Street and Caulfield from July 6–14 whie the works take place.

Coaches will also replace trains between Wendouree and Southern Cross on the Ballarat line from June 24-July 7.

Minister Allan thanked commuters for their patience while the works were carried out.

“Soon these massive tunnel boring machines will be digging underneath our city to run more trains more often,” she said.